MCW England/Wales: New Issue of MCW Review: "Solidarity: We are in this together" 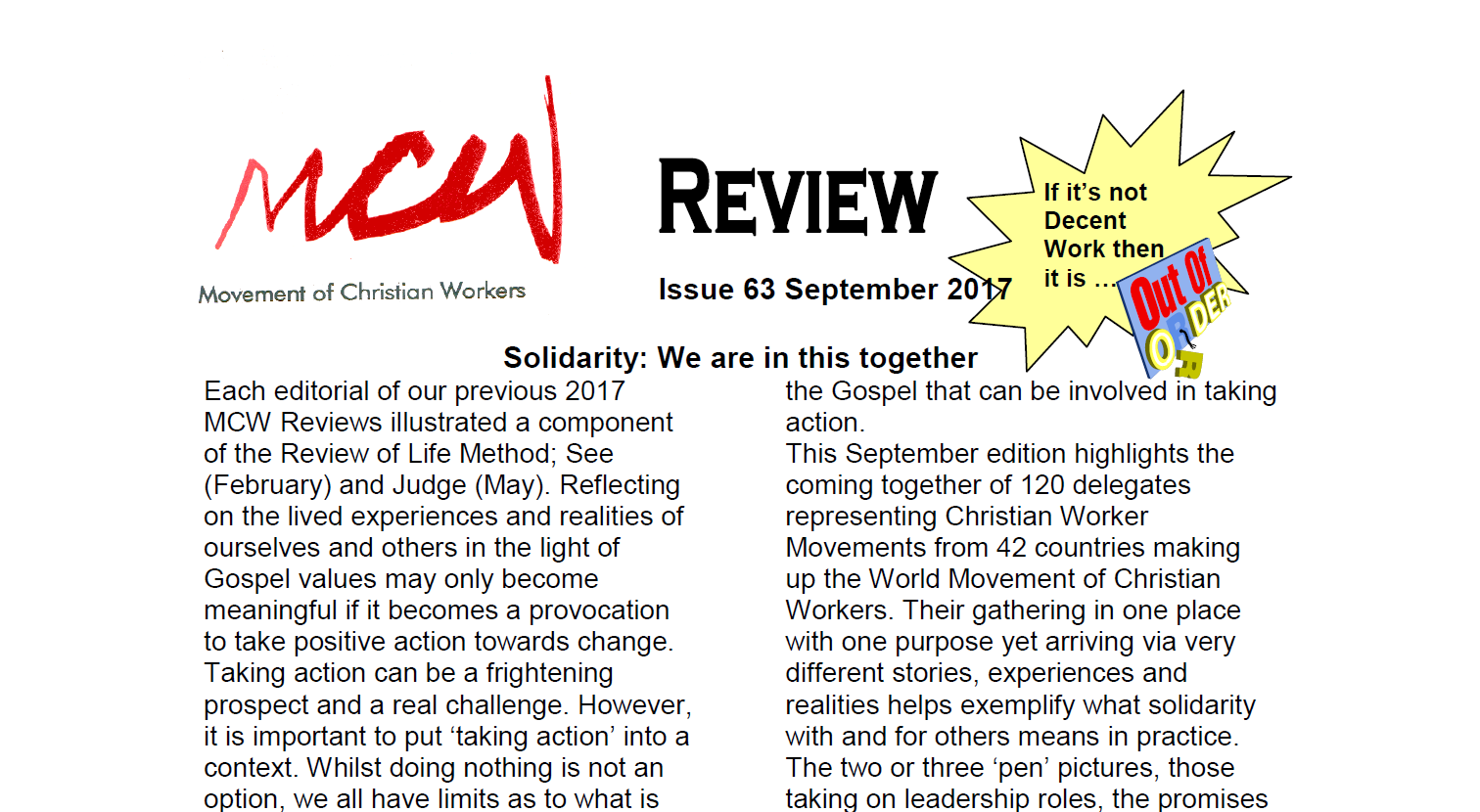 Each editorial of our previous 2017 MCW Reviews illustrated a component of the Review of Life Method; See (February) and Judge (May). Reflecting on the lived experiences and realities of ourselves and others in the light of Gospel values may only become meaningful if it becomes a provocation to take positive action towards change. Taking action can be a frightening prospect and a real challenge. However, it is important to put „taking action‟ into a context. Whilst doing nothing is not an option, we all have limits as to what is possible, of what we can do and what we can be involved in. Our actions can be small or they may involve more complicated steps. Sometimes the process of simply raising our own awareness and then sharing it with others is quite a telling act in itself.

What do we want to see changed? What can we do? How can we involve others in our actions are all questions arising at this stage of the Review of Life. What is crucial however is that you are not alone and that the aims and objectives are achievable. Having others sharing your aims along with a unity of purpose creates a solidarity of action and the continuing belief in the need for change; the need to be part of making that change. Being one person trying to raise the awareness of someone else is no less of a challenge or important than a group supporting someone taking action in the community or a workplace, or a member who has taken on a role as an MP, Local Councillor or Trade Union Rep. All are seeking to rise to the demand of being part of making change. This particular MCW Review highlights a much larger gathering which epitomises the resolve, tenacity and commitment to the Gospel that can be involved in taking action.

This September edition highlights the coming together of 120 delegates representing Christian Worker Movements from 42 countries making up the World Movement of Christian Workers. Their gathering in one place with one purpose yet arriving via very different stories, experiences and realities helps exemplify what solidarity with and for others means in practice. The two or three „pen‟ pictures, those taking on leadership roles, the promises to try and make a difference on their return home demonstrates their wanting to take action in anyway they can. The English MCW members and supporters are not an insignificant part of this undertaking. Without your generous and significant contributions to the solidarity fund it is likely that some who attended may not have found it possible. Thank you once again for your loyal, continuing support and faithfulness in the work of the National, European and International Movements. A short report from the European Seminar which took place immediately before the World Movement meeting is also included in this Review.

The response to the 2017 appeal brings to mind that certainly one generation of Young Christian Workers (YCW) used to refer to the apostolic significance of finance when seeking a pledge of a day‟s pay to help fund the Movement. A memory such as this for ex-YCWs is being requested to mark the YCW‟s 80th Anniversary. Their Celebration Mass on Saturday 18th November in Salford means that the MCW National Conference / AGM has now been changed to Saturday 25th November 2017. It will take place in Gateshead.

Download the latest issue of INFOR June 2021 INFOR, a publication of the WMCW